As a member of Generation X who spent his early adult years in New York City, I tend to be pretty cynical. That’s why my reaction to news of some new scam is usually along the lines of “Oh. Of course.”

I don’t often get that feeling from science news, but a piece last week in Nature certainly did the job. To be clear, this is not a criticism of the news article by Holly Else, which was well reported and written. The story Holly uncovered, though, is one of those tales so convoluted that while it’s clear that at least a few of the people involved are up to some shady shenanigans, it’s hard to tell who. Nonetheless, it reveals a previously underappreciated risk in science publishing.

The piece is free to read, and I recommend doing so. In a nutshell, a company called Cassava Sciences is developing an experimental Alzheimer’s disease drug, and publishing data from their preclinical and clinical trials in peer-reviewed journals, as one should. However, several of those papers have been flagged by “whistleblowers” as containing questionable data, prompting investigations by journal editors, research institutions, and regulators. I put “whistleblowers” in scare quotes, because of recent revelations that at least some of the folks calling these papers into question have also taken short positions on the company’s stock before filing those reports. Get it? 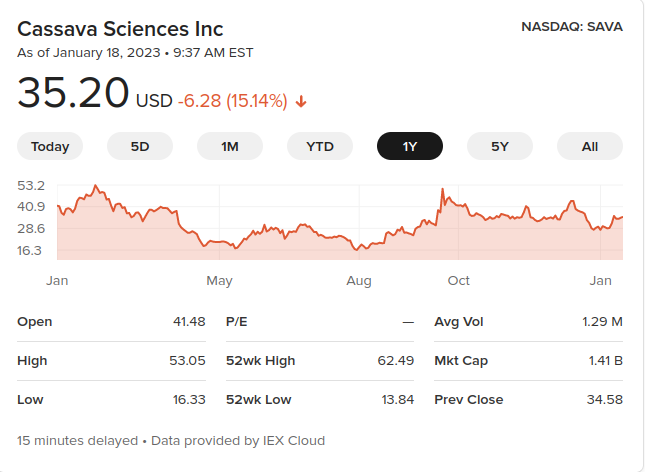 Some of those dips correspond to journal investigations.

Whenever potentially bad news comes out about a company, the stock value dips. Someone could make a lot of money by knowing when that’s about to happen, and setting up to sell the stock short. And what better way to know when the bad news is coming than to generate it yourself, by initiating a whistleblower complaint and letting the journal report it?

The people who’ve apparently been doing this deny that it was deliberate, of course; it would certainly run them afoul of the Securities and Exchange Commission. Nonetheless, it appears that they did indeed profit from short selling Cassava. That’s led at least one journal to implement a new policy, requiring whistleblowers to disclose financial conflicts of interest.

If that was the whole story, it would be pretty clear, but there’s a twist: the drug Cassava is developing is a bit out of left field. It targets a mechanism that most Alzheimer’s disease researchers haven’t considered important for pathogenesis. That doesn’t mean it won’t work, but at least to some experts in the field, the basic science behind it seems a bit preliminary.

It certainly wouldn’t be the first time a biopharmaceutical company charged ahead with a lead that might’ve been better kept in the lab awhile longer. Did that cause someone to take shortcuts? Might the complaints about Cassava’s publications have some merit, despite their dubious sources? For that matter, would it be wrong for someone to take a short position on a company’s stock if they’d concluded, on looking at published data, that the science behind its product was unsound? I don’t know, but I expect there will be lawyers arguing over exactly those questions soon.

So far, the journal investigations haven’t found any wrongdoing by Cassava researchers, and I certainly don’t intend to second-guess that. The deeper issue is that now that news of this situation has come out, we can expect many other folks to try to exploit the naïveté of journal whistleblower policies in stock scams. Whether that was what happened in this case or not, the idea is out now, and journal editors had better brace themselves.

Of course, adding a requirement that whistleblowers disclose potential conflicts of interest raises a new problem. It’s hard enough to get people to come forward with reports of wrongdoing, considering the grave professional and personal consequences that usually accompany such a move. Nobody likes a snitch, and protections for people in that position often come too late. Adding a conflict of interest disclosure certainly adds another barrier to reporting a problem, and could also provide ammunition for bad actors who want to undermine an otherwise credible charge.

I don’t have a solution to any of this, and am glad I don’t have the job of coming up with one. I’ll be watching to see how it develops, though.